2. The mysterious Pilostyles is a plant within a plant

I happened to be watching Gardening Australia on ABC TV recently and was surprised to learn that a plant from this country had been ‘named under our modern system of scientific nomenclature” in 1768. That is, before James Cook and Joseph Banks sailed north along the East Coast in 1770.

Within the Western Australian horticultural family, I’d often heard of the name Alex George and how his knowledge of Australian flora was legendary. Keen to meet him, I did some digging and was surprised to find out he lives just a stone’s throw from my place.

“This one’s Synaphea spinulosa from the Proteaceae family,” he tells Josh. “It’s an interesting plant for me because it’s one of the first two Australian plants named under our modern system of scientific nomenclature named in 1768 by a botanist in Holland. That’s as big as it grows and it’s a good one for the garden because it suckers, so it will spread slowly, but stay fairly compact.” 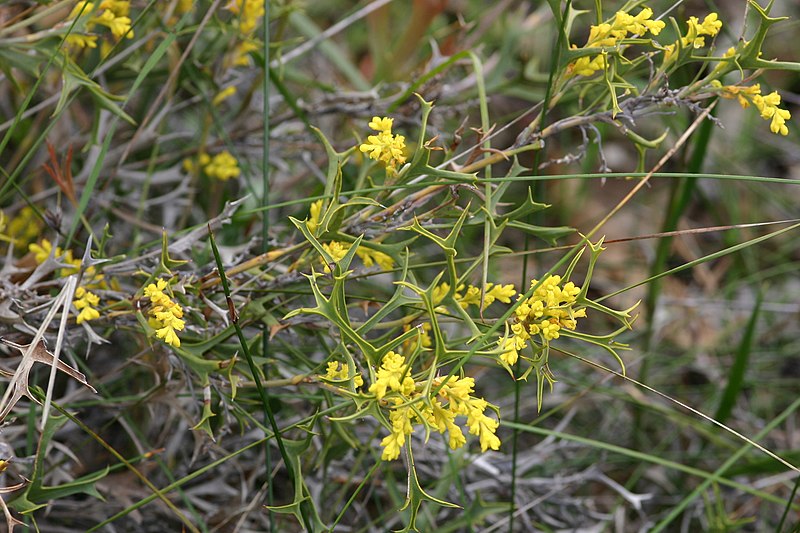 The Dutch botanist is given as Nicolaas Laurens Burman, who classified the plant Polypodium spinulosum. He did not name it Synaphea spinulosa.

It was renamed Synaphea spinulosa by Robert Brown in 1810 “from the Greek name for union or connection, describing an anomaly in the structure of the flower.” (https://en.wikipedia.org/wiki/Synaphea)

This 1768 instance is one those of us interested in the renaming process in this country should know. The actual plant used for the classification is still in existence, although who collected in is not certain.

“It is possible that the first Australian plant specimens collected by Europeans, and the first to be named under the Linnaean system of nomenclature (in 1768), were gathered by Vlamingh or one of his crew. These are Acacia truncata (Burm. f.) Hart. ex Hoffmannsegg and Synaphea spinulosa (Burm. f.) Merrill. The types of both are sterile and bear no collection details. In the protologue, Burman gave the locality as ‘ex Java’-presumably he received them among other collections from the East Indies. He considered them to be ferns, naming the acacia as Adiantum truncatum and the synaphea as Polypodium spinulosum. During the Seventeenth and Eighteenth Centuries a number of Dutch ships touched on the Western Australian coast but there is no information on whether any crew member gathered specimens. Synaphea spinulosa is common along the lower west coast between Bunbury and Kalbarri and is highly variable, but the type matches closely specimens collected later from the coastal plain either side of the Swan River. Acacia truncata occurs from Leeman to Bunbury.” (http://www.asbs.org.au/newsletter/pdf/96-dec-089.pdf )

There is information on Willem de Vlamingh in Peter Macinnes’ book “Curious Minds : The Discoveries of Australian Naturalists.” 2012: 16-19. Basically, Willem de Vlamingh arrived in what is now the Perth area in 1696 while searching for a missing ship (Ridderschap van Holland). Three ships reached what they named Rottnest Island and then sailed onto the mainland and the Swan River – Zwaanenrivier – and the all important Black Swan. They did not directly interact with any First Peoples.

See http://www.vochistory.org.au/vlamingh.html and. while there check out the extent of Dutch visits to the West Coast of this country.

This 1768 Linnaean classification marks the comparatively recent start of the European process which has displaced indigenous systems of classification and naming.

Beyond this European process, which was based on a hierarchical reasoning process which regarded certain features of plants as significant, lies the very different cosmology of First Peoples – and into which plants (and much else) are assigned a position in dual- sided systems of categorisation. We have a lot to learn about what First Peoples regarded as significant.

I am yet to find any First Peoples material about this plant.

What I intend to take up next is the European realisation that whiteness is not a defining characteristic of swans – and relate that to the speculation of Charles Darwin, while in this country in 1836, regarding two creations.

END_OF_DOCUMENT_TOKEN_TO_BE_REPLACED

The Conversation is starting a series on Australian plants, Beating Around the Bush,  and is seeking input from Indigenous Masters students.

I am republishing their first  article by Ian Wright on Bunya Pines. (Republished as allowed from The Conversation) as this coincides with my own intention, during 2018, to learn a little more of the ‘Dreaming’  significance of plants for First Peoples.

Keep in mind some of these self-learning opportunities:

Self-learning exercise 1 – research which First Peoples had rights in the Bunya pine nuts. Which language group? See link in article.   Use the map and other resources at https://aiatsis.gov.au/explore/articles/aiatsis-map-indigenous-australia

Self-learning exercise 2. – research the extent of networks of First Peoples who were invited to the Bunya nut feasts.  What is happening today?  (google search ‘bunya nut festival’)

I am wondering about what the Dreaming significance of Bunya Pines may be? Don’t know the answer.

Welcome to the first edition of Beating Around the Bush, a series that profiles native plants: part gardening column, part dispatches from country, entirely Australian. Read more about the series here or get in touch to pitch a plant at batb@theconversation.edu.au.

The Bunya pine is a unique and majestic Australian tree – my favourite tree, in fact. Sometimes simply called Bunya or the Bunya Bunya, I love its pleasingly symmetrical dome shape.

But what I really love about it is that there are just so many bizarre and colourful stories about this tree – the more you learn, the more you find it fascinating. (That is, unless the tree has harmed you; they come with some hazard warnings.)

Curious Kids: Where did trees come from?

Can you grow it?

Bunya pines (botanical name: Aracauria bidwilli) are living fossils. They come come from a fascinating family of flora, the Araucariaceae, which grew across the world in the Jurassic period. Many of its “cousins” are extinct. The remaining members of the family are spread across the former landmasses of Gondwana, particularly South America, New Zealand, Malaysia and New Caledonia, as well as Australia.

This family includes one of the most amazing botanical discoveries of the 20th century, the Wollemi pine (Wollemia nobilis).

Where the old things are: Australia’s most ancient trees

Bunyas used to be much more widespread than they are now. Today they grow in the wild in only a few locations in southeast and north Queensland. One such area, the Bunya Mountains, is the remains of an old shield volcano – about 30 million years old, with peaks rising to more than 1,100 metres. The Bunya pines grow in fertile basalt soils in this cool and moist mountain environment.

If you want to grow a Bunya, I would suggest that you need a large garden. The tree needs fertile and well-drained soil, and regular watering in drier climates. A shaded position will also help – it can struggle in direct sunlight in its youth.

Bunyas also produce highly valued timber, which is used for musical instruments. It is particularly valued as “tonewood” for producing stringed instruments’ sound boards. Saw logs for Bunyas come from plantations only, as they are protected in their national park wild habitat.

While many people love Bunya pines, this love affair comes with a health warning. They are best regarded with both distance and respect!

The trees are big and typically range from 20m to 50m in height. Their leaves have strings of very rigid and sharply pointed leaves. If you come into physical contact with its leaves or branches, you must wear protective clothes and carefully handle them to avoid pain or even cuts. As a child, the swinging branch of a Bunya made a formidable garden weapon.

But that is nothing compared to this tree’s ability to hit you on the head, possibly with serious consequences. When in season (generally December to March) they can produce dozens of massive cones weighing up to 10 kilograms. These can drop from up to 50m without warning.

I first learned of this when a fellow university student in the 1980s scored an impressively large Bunya cone dent in the roof of his battleship-solid FB Holden ute. My university campus has beautiful gardens displaying dozens of massive Bunyas, but one was perhaps a bit close to the car park. My university friend was lucky not to get hit. Many people have not been so lucky and some have even been hospitalised.

Bunya pines are beautiful trees in large gardens  and are a feature of parks around Australia, but their habit of “bombing” people and property causes considerable angst. Many local councils erect warning signs or rope off the danger zone during cone season. Others hire contractors to remove the cones to protect their residents (and perhaps limit their own legal liability). Sadly, some Bunya pines have been cut down to remove the risk.

The cultural connection of the Bunya pine to Aboriginal Australians is very powerful. The Bunya Mountains in southeast Queensland used to host massive gatherings of Aboriginal groups.

People came to visit the Bunya pines and feasted on the nuts in their abundant cones.  Some travelled from hundreds of kilometres away, and traditional hostilities were dropped to allow access. The seed in the Bunya cone is a delicious and nutritious food, a famous and celebrated example of Australian bush tucker.

Today some trees remain marked with hand and foot holes that Aborigines made in the trunks of older Bunyas. The climbers must have been brave and agile to harvest the cones from such heights.

Sadly, the last of the Aboriginal Bunya festivals was held in about 1900, as European loggers came to the area for its many timber resources.

This article was originally published on The Conversation. Read the original article.

Outline for an Ozstudies course: Dual versus single-sided forms of representation.

1. Read Chapter 3 “Eliza Fraser: Myth and Legend” in “Cooloola Coast” by Elaine Brown (2000 Uni of Queensland Press) See front and back covers below.

Cannibals and Savages: The Power of Colonial Storytelling

Do you know where the name ‘Fraser Island’ comes from? Eliza Fraser’s story is one of the finest tabloid spins in history.

Self learning exercise 1. – compare and contrast indigenous and non-indigenous perspectives on this story.

Self learning exercise 2. – dual naming and the official recognition of indigenous languages and place names.

(Next – the semantic domain of official statues in civic places. See Stan Grant re Cook http://www.abc.net.au/news/2017-08-25/stan-grant-captain-cook-indigenous-culture-statues-history/8843172 )

The audio download on this ABC Off Track program regarding Yeperenye (Caterpillar) Dreaming in Mparntwe – Alice Springs is worth a listen. It is 28 minutes long, so you need to make time to listen.

The local Dreaming landscape was very well known since the work of anthropologists Spencer and Gillen circa 1900, but treated as insignificant by Australian authorities until the 1980s.

Program raises the issues of sacred sites which have been negatively impacted on by the development of the town –  and more.